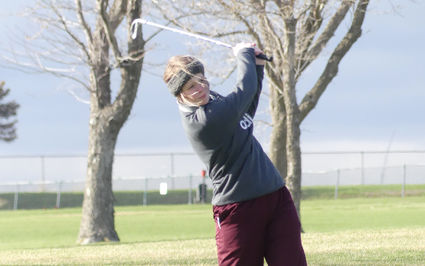 Darby Mastbergen hits her iron shot to the green during action at Sanborn last week.

The Hartley-Melvin-Sanborn girls' golf team recorded its second-lowest score of the season during a War Eagle Conference meet with West Sioux on April 15. West Sioux won the meet played at the Hawarden course by a score of 210-222.

Megan Ten Kley and Kinsey Schirmer finished among the Top 4 individuals for the first time in a meet. Ten Kley was second with a 51 and Schirmer took fourth with a 54.

"I was very happy with how the girls came out and competed," said Hawk coach Cheryl Kroese....