Not quite the way it was planned 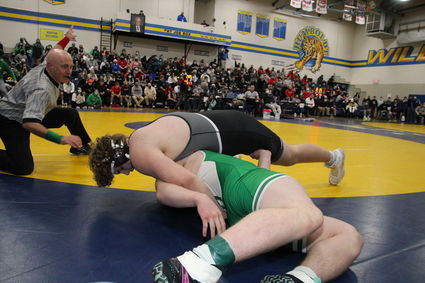 Scoring back points in the third period helps Nick Bronstad win a decision over Cole Jeffries in the semifinal round on Saturday.

The path to qualifying for the state wrestling tournament for Okoboji/H-M-S wrestler Nick Bronstad got off to a good start on Saturday but was then nearly derailed.

Wrestling at 285 pounds, the junior was in control of his opponent in the district semifinal match at Humboldt when he suffered a leg injury. He was able to complete that match but had to forfeit the first place contest. Even so, Bronstad finished second and qualified for state for the first time.

He is the first wrestler from H-M-S to qualify for the state tournament since 2015 when Dakota Drenth finished fourth at 152 pounds i...