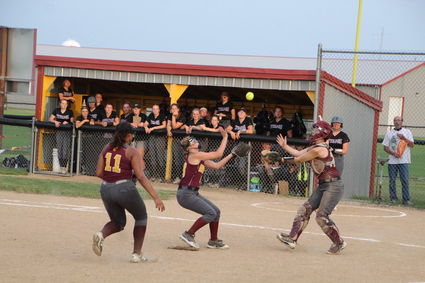 Hannah Jochims, Taya Mason and Elle Mastbergen all converge on the ball during the Hawks' game with GT/RA. Mason made the catch.

An eight-run fifth inning in South O'Brien's 13-2 win was a sign of things to come. The Wolverines added four runs in the first inning and another in the third during the June 29 contest in Hartley.

"We were able to keep ourselves in the game through our defense," Hawk coach Carissa Post said. "But then our defense slowly started to fade and we ended up with costly errors."

H-M-S cut the early deficit with two runs in the first inning. The Hawks did not score again, although they had...