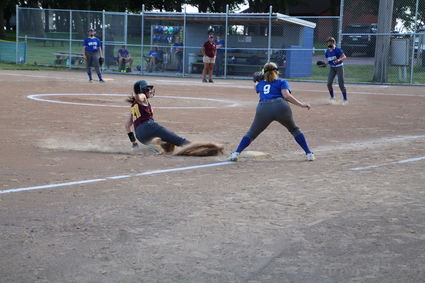 Aggressive base running by Jasmine Lux and the rest of the Hawks contributed to 19 runs in their win over H-LP.

After going hitless in the first game of the 2020 season, the Hartley-Melvin-Sanborn softball team's bats came to life during a 19-0 triumph over Harris-Lake Park on June 17.

"What a great win for the girls," said Hawk coach Carissa Post. "It was much-needed after a season-opening loss against West Sioux."

Every H-M-S batter had at least one hit, including three by Brynn Webber. Among them was an inside-the-park homerun that wrapped up the scoring in the third inning.

Hannah Jochims added a double and a single, and Bailey VerHelst hit two singles and drove in two runs. Jasmine Lux also had...