Plenty of spots to fill for H-M-S softball team 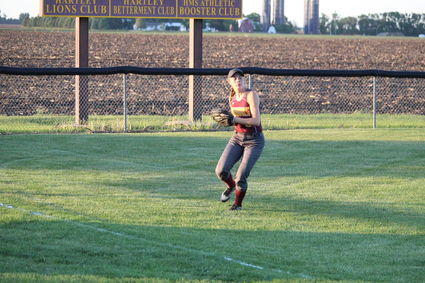 Junior right fielder Jessica Riedemann is one of two returning starters for H-M-S in the outfield this year.

Filling open defensive positions is a top priority for the Hartley-Melvin-Sanborn softball team in 2020. H-M-S lost five players to graduation following last season's 4-21 campaign, including four who were everyday contributors.

"We have a lot of spots to fill," acknowledged Hawk coach Carissa Post, who is in her third year with the program.

"Our seniors are going to lead us," she commented.

Jochims was H-M-S's leader in offensive production last year, including a .500 batting average and 35 hits. On defense the all-War Eagle Conference first team selection will be at third base, where she played most of the 2019 season.

Haag is the most experienced pitcher, having started 19 games last year. She finished with a 2-17 record. When she is not pitching, the senior will rotate to second base.

Alternating with Haag in the pitcher's circle and at second base will be junior Taya Mason. Mason and freshman Brynn Webber both made brief varsity pitching appearances last year.

Junior Darby Mastbergen will be the shortstop and junior Elle Mastbergen is the Hawks' catcher. Freshman Cadence Klein is a capable backup behind the plate.

Returning to the outfield are junior Jessica Riedemann in right and Webber, who moves to center. That means H-M-S needs a leftfielder.

"We are unsure at this point who that is," Post said. "We have quite a few outfielders."

Among those is sophomore Grace Dalen, who started 13 games last year at CC/E.

Reducing defensive errors was a priority in 2019 and the results were mixed. Post hopes that a continuing emphasis on good defense will pay dividends this year.

"It seems like errors get us," she noted. "We either have no errors or a lot. We want to keep errors to a minimum." 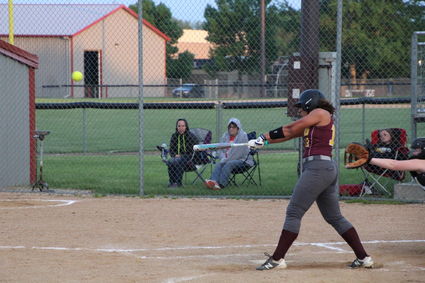 Hannah Jochims was H-M-S's leader in offensive production last year, including a .500 batting average and 35 hits

Freshman Emily Mutombo and junior Elly Klein will contribute as pinch runners or courtesy runners, providing additional speed on the base paths.

"We've been working on base running a lot. We are not aggressive enough on the bases," Post said.

The late start of the season due to the COVID-19 pandemic will limit H-M-S to 11 games, 10 of which are against War Eagle Conference teams.

"It would be nice to see other people. We'll miss seeing other teams," Post said.

Conference contenders mentioned include perennial favorite Akron-Westfield (1A No. 12), Gehlen Catholic (1A No. 11), West Sioux (2A No. 5) and South O'Brien. The Hawks were 3-8 in conference games last year.