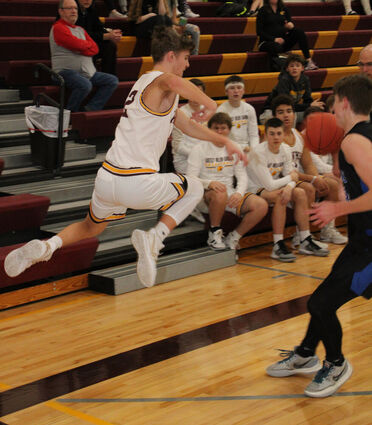 Mason Brinkman makes a hustle play to keep the ball alive during the Hawks' 45-43 win over MMCRU.

Given the opportunity to turn the tables on two opponents that had won earlier meetings, Hartley-Melvin-Sanborn earned wins over MMCRU and Harris-Lake Park, and won two more games to wrap up a 4-0 week.

"It was nice to get back in the win column," Hawk coach Naet Hoaglund said. "I thought our guys came out and competed hard, especially on the defensive end. Offensively, we made it a priority to attack gaps in their 3-2 zone which got us some great scoring o...