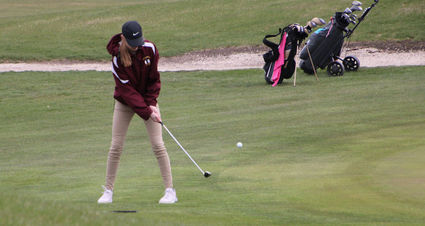 Elise Haack chips the ball toward the green against South O'Brien. She was the top medalist for the meet.

The team scores were not low enough to earn a win, but there were noteworthy individual accomplishments for the Hartley-Melvin-Sanborn girls' golf team in a pair of War Eagle Conference golf meets.

Individually, Elise Haack topped the leader board in a three-way tie with Kaeley Einck and Whitney Einck of South O'Brien. All three finished with rounds of 52.

Also having "a nice night" for H-M-S was Elle Mastberge...