Shooting makes all the difference

Hawk girls can't get ball into the basket against Jays 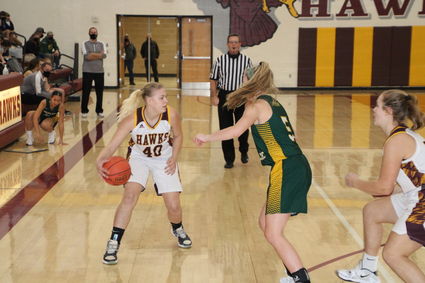 Paige Gehrke looks for a path around a Gehlen Catholic defender during the Hawks' home game on Dec. 1.

Improvement in some areas was evident as Hartley-Melvin-Sanborn played its second girls' basketball game of the young season. Compared to the opener, the Hawks cut their turnovers in half and shot well (88.3 percent) at the free throw line against visiting Gehlen Catholic.

H-M-S also had plenty of looks at the basket, taking 60 shots from the floor. But they made just 25 percent of those attempts while Gehlen Catholic made 44 percent of their 66 field goal tries. That disparity resulted in H-M-S's 69-42 loss on Dec. 1.

The score was close until late in the first quarter when Gehlen Catholic...