Hawks' great effort not quite enough against Royals 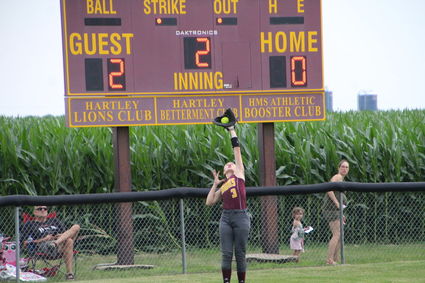 Jessica Riedemann fully extends to catch a fly ball in left field. She then threw to third base to retire a Remsen St. Mary's runner.

Hartley-Melvin-Sanborn's softball team saved one of its best performances for the final game of the regular season, but it was not enough to avoid a 6-5 loss to MMCRU on July 8 at Remsen.

The Royals scored all their runs during the first three innings, including four in the opening frame. They also scored once in the second and third innings.

H-M-S also scored in each of the first three innings, one run at a time. A two-run sixth inning pulled the Hawks to within 6-5, but they failed to score in the seventh.