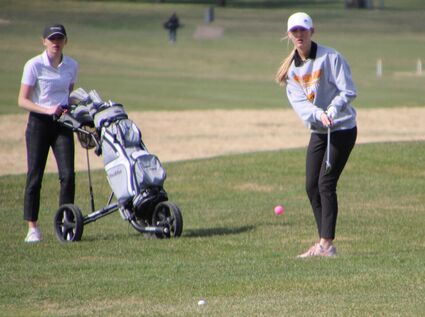 Elise Haack watches the flight of the ball during an approach shot in action against Unity Christian.

Season-best performances led to two wins for the Hartley-Melvin-Sanborn girls' golf team on April 29 at Sanborn. The meet was a makeup date for earlier-scheduled events.

In War Eagle Conference play, the Hawks topped South O'Brien, 204-215, to earn their first win of the season. In non-conference action, H-M-S completed the sweep with a 204-220 victory over Sioux Central.