On top of their game 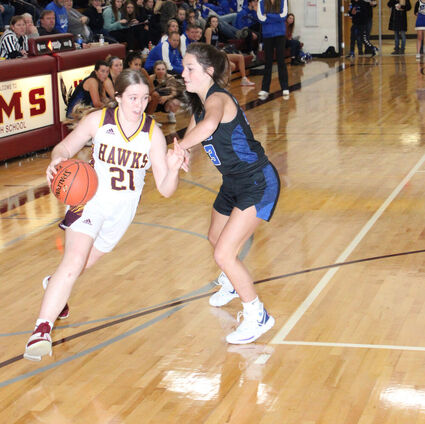 Frankie Mohni tries to get a step on an MMCRU defender during the Hawks' loss on Jan. 31.

Big finishes in both halves helped Hartley-Melvin-Sanborn defeat Harris-Lake Park, 61-45, on Feb. 1 in Hartley. It was the Hawk girls' first win since Jan. 18.

The 10-10 deadlock at the end of the first quarter reflected the early seesaw battle. It continued until H-M-S took the lead for good with 5:45 left in the second quarter. The Hawks extended it to 29-20 at the half.

"The girls were mentally and physically ready to go. They played the whole game and they played hard. They were on top of their game," said Hawk coach Lester Tessum.

H-M-S built a 16-point advantage in the third quarter b...