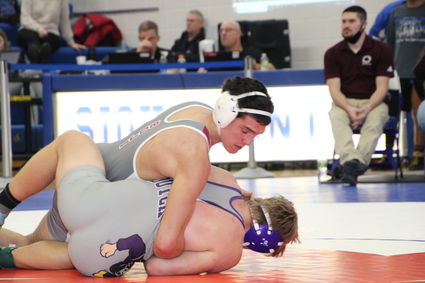 Chayton Faulkner attempts to put Carson DeYoung of MOC-FV on his back in consolation action at the Siouxland Conference tourney.

Okoboji/H-M-S closed out the Siouxland Conference dual portion of its 2020-21 schedule at Sibley on Jan. 25. The Pioneers defeated Sibley-Ocheyedan (52-30) and lost to Sheldon/South O'Brien (54-21) to give them a final conference dual record of 2-5.

Nick Bronstad won both of his matches while Chayton Faulkner was 1-1 and Bryce Dodge and Jonathon Ortiz were 0-2.