Best week of practice translates into 22-7 win over Jays 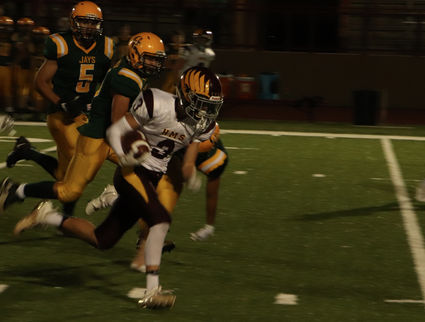 After taking a hit while catching a pass, Mason Brinkman heads downfield for a big play against Gehlen Catholic.

After consecutive disappointing losses, Hartley-Melvin-Sanborn football players and coaches made a concerted effort to move on and focus on the next opponent. The results of Friday's game at LeMars say it all: Only one turnover, four penalties for just 33 yards, and a 22-7 win over Gehlen Catholic.

"We just had a different outlook. We were physical for four quarters. We were going to play hard," Hawk coach Tyler Horkey said.

The Hawk defense was dominating. The Jays only gained 20 rushing yards on 21 attempts. They did pass for 126 yards, but were limited to four completions in 18 attempts....