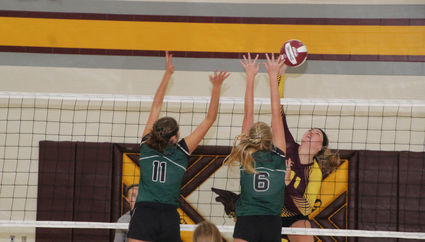 Ava Reitsma goes up for an attack against Jamie Kooima of Trinity Christian. The senior recorded four kills in the match on Sept. 15.

Hartley-Melvin-Sanborn's second trip in a week to Sibley to play volleyball was almost as successful as the first. Competing in a tournament hosted by Sibley-Ocheyedan on Sept. 14, H-M-S finished with two wins in three matches.

For the night, Ava Reitsma and Jasmine Lux led the offense with 16 and 14 kills, respectively. Darby Mastbergen put down nine kills and Olivia Grooters had five. Taya Mason was credited with 32 set assists.

Defensive leaders were Riedemann with 23 digs, Mastbergen with 16, Mason with 14, Pearson with eight, Elise Haack with six, and Grace Dalen and Reitsma with five each.

H-M-S rallied in the first set to force a 14-14 tie. A brief 20-19 lead did not last, as Trinity Christian scored six of the final seven points. The second set belonged to the Tigers, who built a 16-6 lead and were not serious challenged from that point.

The Hawks had a golden chance to get back into the match in the third set. After taking the lead they extended their advantage to 22-14. Three ace serves (out of a total of 16) pulled Trinity Christian to within four. H-M-S answered with a kill, but the Tigers then went on an 8-1 run to close out the win. 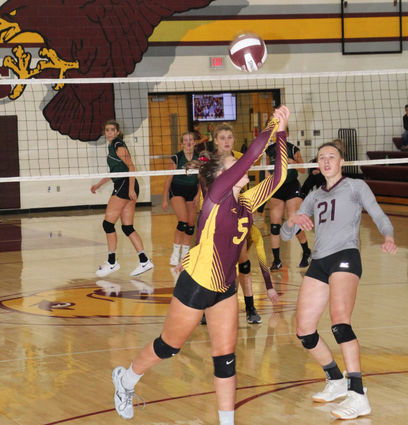 At the net, Lux put down six kills; Grooters had five, Reitsma had four, and Mason and Mastbergen each had two. Mason recorded 14 set assists.

On defense, Riedemann recorded 17 digs, Mastbergen had 14, Dalen and Reitsma each had seven, Mason had six and Lux had four.

Lux had one solo block and an assist, and Grooters added two assists.

The Hawks will also play at Hinton on Monday, Sept. 28. That is a change of date from the original schedule.