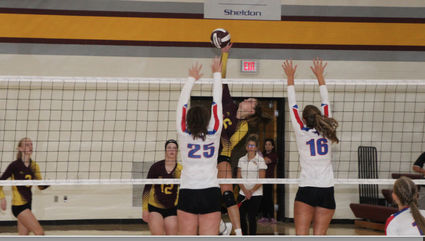 Jasmine Lux goes up for an attack against West Sioux. She led H-M-S with seven kills in the 3-0 loss to the Falcons.

Hartley-Melvin-Sanborn posted a 1-2 record in its 2020 volleyball season debut at the West Lyon tournament on Aug. 25

Of their 23 total kills, 12 came in the Hawks' win over the Falcons. Overall, Taya Mason and Darby Mastbergen each put down five kills, Jasmine Lux and Ava Reitsma had four kills and Olivia Grooters added three. Lux also had two solo blocks and an assist.