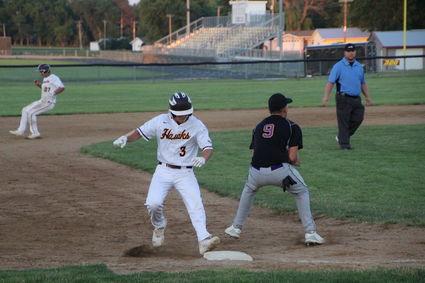 Trenton Vollink reaches third base before the relay throw can get to the West Bend-Mallard infielder.

The best run production of the baseball season lifted Hartley-Melvin-Sanborn to a 6-3 non-conference win over West Bend-Mallard, on July 7 in Hartley.

The Hawks scored two runs at a time to take the lead, regain it and extend it to win their second game of the season.

Dawson Schiphoff singled home both first-inning runs. In the third, Keaton Graves drove in the first run with a single and Trenton Vollink scored the second on an error to put the Hawks back in front.

H-M-S scored in the sixth on a double by Samuel Haack and a single by Sam Heyn.