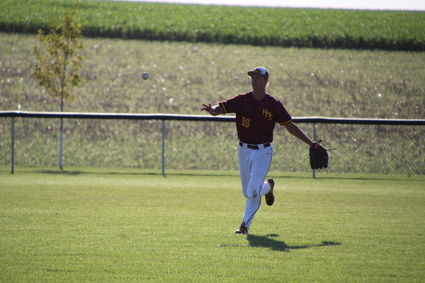 Centerfielder Dawson Schiphoff gets the baseball back to the infield after a hit by the Tigers.

After surrendering 26 runs in two previous games, the Hartley-Melvin-Sanborn baseball team had chances to get into the win column at South O'Brien on June 25. But nine runners left on base put the Hawks on the wrong side of a 3-1 score.

H-M-S took the lead in the second inning when Sam Heyn singled, stole second base and scored on an error. Keaton Graves and Jordan Ortega later singled in the inning, but the Hawks could not get them home.

That set the pattern for the game. H-M-S stranded a runner at third base in the third and sixth innings and left two runners on in the fourth and seventh...