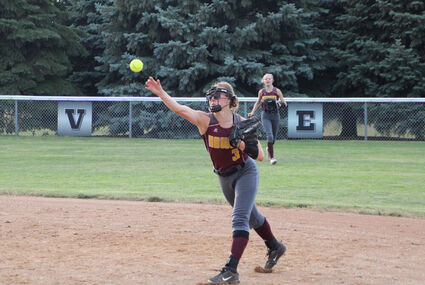 Second baseman Jessica Riedemann makes a throw toward first base during H-M-S's game with South O'Brien on June 28.

Not enough hits or hits not coming at the right time plagued the Hartley-Melvin-Sanborn softball team during three losses last week.

The Hawks' best chance for a win came against Graettinger-Terril/Ruthven-Ayrshire. They were engaged in a 1-1 deadlock until the seventh inning, when the Titans scored the run they needed to earn a 2-1 win on June 29 at Ruthven.

"The girls played a great game defensively," said Hawk coach Stephanie Bronstad. "We hit the ball pretty well, but not as well as we needed."

H-M-S answered GT/RA's first-inning run with one in the second. Darby Mastbergen was hit by a...