An early start to the season 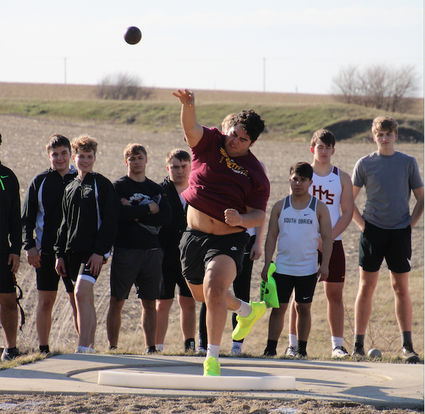 Jesse Garcia competes in the shot put during the South O'Brien meet on March 29. He placed fifth in the varsity event.

A pair of early-season outdoor meets gave the Hartley-Melvin-Sanborn boys' track and field team its first taste of competition for the 2021 season.

Hawk coach Kyle Borchers said the first meet, hosted by West Sioux on March 25, was something like a scrimmage that gave teams a chance to work out in a competitive setting. The meet on March 29 at South O'Brien was more like a regular meet, but Borchers again used it as a means of gauging how far along the Hawks have progressed.

At South O'Brien, Connor Dodd won the 100 and 200 meter dashes and Kooper Ebel won the 400. Dawson Schiphoff was runn...