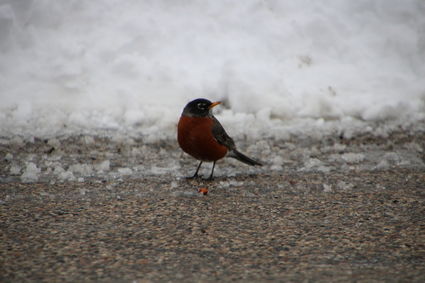 A robin ponders his new snowy surroundings Monday on First Street Southwest in Hartley, possibly second-guessing the decision to return to northwest Iowa so early this year.

You can't get rid of Old Man Winter that easy.

Denizens of northwest Iowa were reminded which season it is on Monday when a winter stormed dumped nearly half a foot of snow on some parts of the region. The wet, heavy white stuff made for strenuous scooping, and snowflakes continued to fall during most of the day on Tuesday.

Accumulation on Monday varied across the region, according to the National Weather Service in Sioux Falls. Everly and Sheldon tallied 5" and 5.5", respectively, while Lake Park received 4" and Spirit Lake got 6.3".