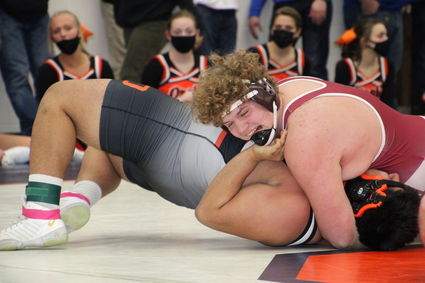 Nick Bronstad goes for the pin of Luis Martinez of Sheldon/South O'Brien in the consolation semifinal match at 285 pounds.

Nine Okoboji/H-M-S wrestlers placed in the Top 6 in their respective brackets at the 2021 Siouxland Conference tournament, on Jan. 29 at Sioux Center.

The best finishes for the Pioneers came from Noah Strantz, who was the runner-up at 152 pounds, and Sam Pas, who placed third at 220 pounds. Okoboji/H-M-S also had one wrestler finish in fourth place, three place fifth and two finish sixth.