Failing to hit the mark 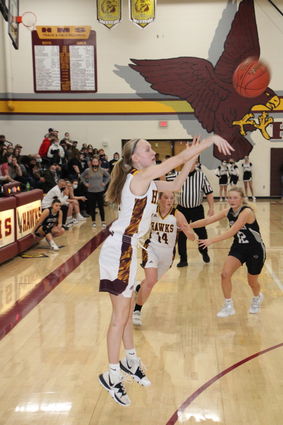 Elise Haack launches a three-point attempt in the H-M-S girls' game with South O'Brien on Jan. 26.

After struggling to get shots to fall early in the game, H-M-S made a run at South O'Brien in the second half before falling short, 55-44, on Jan. 26 in Hartley.

Twenty-two percent field goal shooting hampered the offense, especially early in the game when the Hawks trailed 12-5 after one quarter and by 14 points late in the first half.

A 10-0 run in the third quarter pulled H-M-S to within 31-30. South O'Brien edged back to a four-point lead to start the final period and increased i...