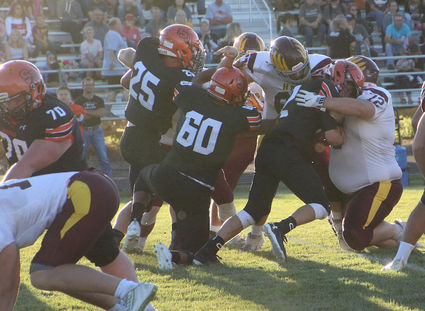 Gabe Bronstad greets Beau Jenness in the hole for this tackle early in Friday night's game at Sibley-Ocheyedan.

The final score of this year's football game between Hartley-Melvin-Sanborn and Sibley-Ocheyedan was different, but the result was just like their 2019 matchup: a one-point win for the Generals.

And as they did last year, the Hawks allowed the go-ahead touchdown in the second half and eventually fell short, 19-18, Friday night at Sibley.

"It was disappointing to say the least," Hawk coach Tyler Horkey acknowledged. "We had opportunities to capitalize, and we couldn't."