Not your average fire call 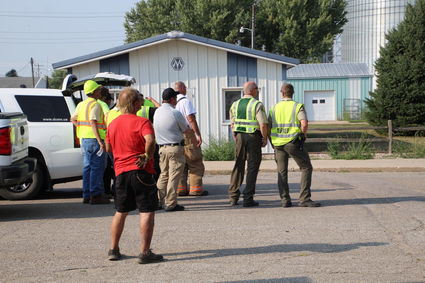 First responders and other onlookers take in the scene near the grain elevator explosion in Royal on Aug. 25.

Royal firefighters didn't have a hard time figuring out where the problem was Aug. 25 when they responded to a call about an explosion at Ag Partners.

A gaping hole at the top of the cement structure was clearly visible and black smoke could be seen billowing northwards from miles away. A daunting task no doubt, but the firemen's training kicked in right away.

"We called for mutual aid with surrounding departments for water and man power. We also called in a structural engineer," said Royal Fire Chief Matt Goyette. "Homes and businesses were evacuated. We used a defensive attack, just tryin...