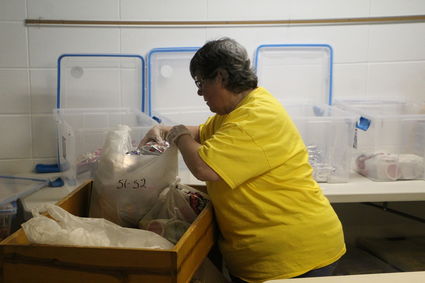 The COVID-19 pandemic has created economic turmoil and shut down countless activities over the last two months, but it hasn't stopped local volunteers from feeding children in need.

The Hartley-Melvin-Sanborn Kids' Backpack Program has seen a surge in demand since mid-March. With school closed for the rest of the year, children who would normally get two meals a day in H-M-S cafeterias have been forced to rely on other sources of nutrition.

The program, which traditionally provides snacks and other food items to students in need over the weekends, has seen the number of children it serves nearly triple from 25 to 70. Organizers have shifted to handing out food every two weeks and now include more hearty items than before.

"We've had quite a bit of food going out," said Marsha Vander Broek, who helps pack meals for the Kids' Backpack Program. "Instead of making it just individual meals for the children, we're trying to move it over to things like a box of spaghetti and sauce for the whole family."

The program is open to any student at H-M-S, regardless of age. Elementary secretary Deb Bleeker works with school counselors to determine which children are in need of food assistance. The program typically only runs during the school year, but organizers are planning to keep it going through the summer.

"We think we have the funding to continue what we're doing right now," Vander Broek said. "I just see it continuing because we've had such great support from the community." 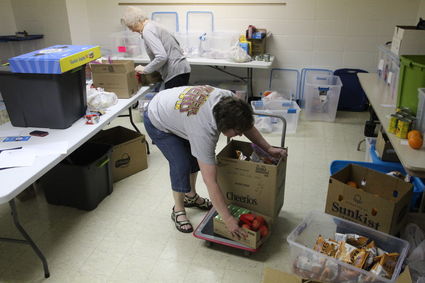 Several churches, businesses and community organizations contribute time and money to help keep the program on its feet. Both Vander Broek and Bleeker said that support has continued throughout the pandemic.

"It's basically the community that keeps this going," Vander Broek said.

Notable contributions have included liquid eggs from a local egg producer, hamburger and coupons. Fiesta Foods has upped its produce contributions, and others have contributed financially.

Organizers prefer monetary donations rather than food, simply because they like to keep items in each food package standard for each recipient. Tax-deductible contributions can be made at United Community Bank in Hartley or Fiesta Foods.

"The families are very appreciative," she said.