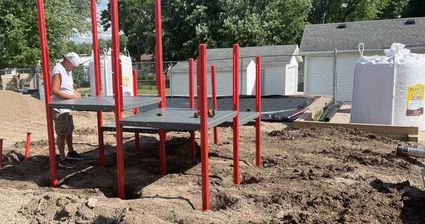 Christmas is coming early for tykes and toddlers at the Hartley Community Daycare Center.

The local facility is in the process of installing new playground equipment and rubber mulch in the outdoor recreation area. Existing pea rock and other structures will be removed to make room for the improvements, which were made possible by grants and fundraisers.

Daycare director Kaity Harms said she's been eyeing playground upgrades since she took the job in the summer of 2019.

"I made a list of things that I wanted to accomplish as the new director that included many small goals and a few big goals," she said. "My first big goal I wanted to accomplish was the playground, and I am so happy to see it come to fruition so quickly. This is the type of upgrade the children needed here."

According to Harms, the rubber mulch creates a different barrier for the playground's fall zone and requires less area than the pea rock, which in turn made it more affordable. The other half of the playground will be getting artificial turf installed by Brown's Lawn and Landscaping to provide a "grassy area" for kids to run and play on.

"That's something they don't have unless they get a field trip to the park," Harms said.

The new turf and rubber mulch will be less to clean up for both staff and parents, too. With the current surface, children often come home with dusty clothes and plenty of rocks in their shoes.

"The rock was hard to keep in the playground and was incredibly messy," Harms said. "It was also hard to bring young children outside as they would try to put the small rocks in their mouths."

The daycare was able to pay for the playground upgrades with revenue from its first fundraiser as well as a $12,500 contribution from Valero. Other grants and smaller fundraisers also helped raise additional money for the improvements.

"Without all of that we would not be able to accomplish this project," Harms said.

The playground hasn't been the only thing on the daycare's to-do list. Other projects like exterior painting, new fencing and new insulation have been completed in the past year. Harms also wants to get the windows and doors replaced and build a new shed for outdoor toys.

"We also want to renovate the upstairs of the building to create a space for our school-age kids to have an afterschool program," she said.

The daycare center currently has a roster of 72 kids and a waiting list. The facility's capacity is 67, meaning there cannot be more than 67 kids in the center at one time; however, Harms explained the 72-child roster is comprised of both full and part-time attendees. 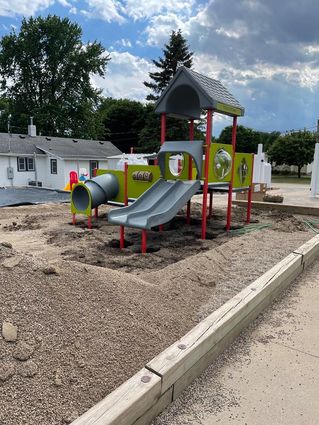 The new equipment and rubber mulch are hoped to be insalled by the end of the week.

She said the daycare's success is thanks to the support of local businesses, parents and other community members. She and the board of directors are looking forward to the facility's annual fundraiser slated for Saturday, June 26 at the Hartley Community Center.

"None of our recent projects would have been possible without the community's strong support, and we greatly appreciate their help," Harms said. "Hartley is a special place."

Kelly’s Catering will provide a meal, and entertainment will feature dueling pianos. A silent auction featuring a variety of unique items will also be held.