Eking out another close win 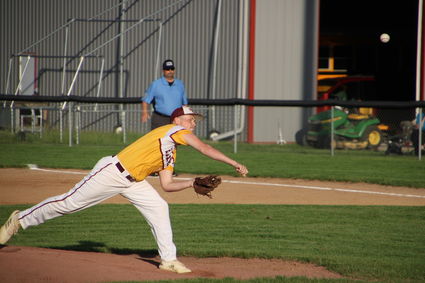 Senior Samuel Heyn pitched a five-hitter against South O'Brien to earn his second pitching win of the young season.

Locked in a low-scoring battle with South O'Brien, Hartley-Melvin-Sanborn's baseball team did all that was necessary to secure a 2-1 win on June 1 in Hartley.

The Hawks scored their runs in the third inning. Keaton Graves was safe on a fielder's choice and scored on a triple by Dawson Schiphoff. Jacob Cates then singled home Schiphoff to give H-M-S a 2-0 lead.

H-M-S had chances to extend the advantage, but left the bases loaded in the fourth and stranded two runners in the first and fifth innings.

The Wolverines threatened to score in the second inning, but Hawk pitcher Samuel Heyn worked o...