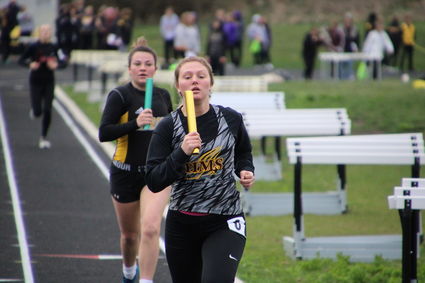 Taya Mason approaches the finish line to conclude the 4x800 relay at the Tomahawk Relays at Cherokee.

The Hartley-Melvin-Sanborn girls' track and field team continued its early-season meets by competing at the MOC-Floyd Valley Dutch Relays on April 6 and the Tomahawk Relays on April 9.

"This was a great meet for Madison," Hawk coach Nicole Dorhout said. "It's fabulous to win one event, much less two. She's been working really hard."