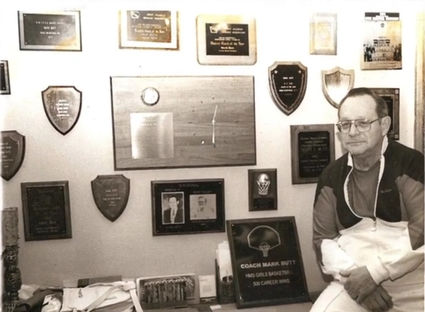 Dr. R.W. Leemkuil, of Primghar, planned to open a dental office in the Legion Hall. The offices were being decorated and fitted for the new practice.

Adolf Goetsch was elected president of the Hartley school board for the coming year. O.E. Lester, superintendent of the local school system, was re-elected for another year.

Extensive remodeling was being done at Huntting Elevator. The entire office was razed and was to be replaced by a modern tile building. The elevator itself was to be enlarged and new hoisting equipment was to be installed.

LuVerne Knicker and Amy Brehmer were placed on the honor roll of the U.P. all-star basketball team. It was quite an honor, as only two teams were picked and then only a few girls for the honor roll.

Approximately 125 Lincoln Township farmers and Chamber of Commerce members attended the annual farmers' dinner. During his remarks, Congressman Wylie Mayne reminisced about his boyhood experiences in his hometown of Sanborn with Dr. J.C. Peterson, Jr., Leslie Getting and his cousin, Earl Norton.

The Hartley school board accepted the salary proposal presented by the Hartley Education Association. Terms included a $100 increase in the salary base, an additional step in the M.A. and M.A.+15 schedules, as Hartley was below average compared to other schools in the area, and an insurance fringe benefit. The insurance plan would include major medical, term life, accidental death and long-term disability protection. The plan would cover the school employee only at a cost of $76.92 annually, or a total cost of $3,846 for 50 teachers.

Hartley-Melvin-Sanborn girls' basketball coach Mark Butt was presented the Iowa Girls High School Athletic Union's highest award, "The Golden Plaque of Distinction to the Superlative Iowa Coach." The plaque was so large that Butt didn't have a place to hang it in his home. As the award came after he had missed the 1995-96 season due to health issues, Butt joked that the IGHSAU gave it to him because they thought he was going to die.

The H-M-S FFA Chapter asked the school board for permission to use a 3.5 acre site northwest of Peterson Field as an alfalfa test plot. The chapter would use it to study alfalfa varieties and provide other educational benefits to students in the program. The proposal also noted benefits to the district, including a reduction in labor costs for maintaining the site. The board tabled a decision in order to further study the proposal.

"From Our Files" is compiled by Sentinel-News sports editor/staff writer Mike Petersen.