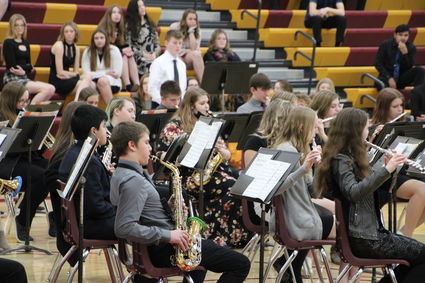 The winter concert presented by Hartley-Melvin-Sanborn High School instrumental and vocal students on Feb. 22 featured something for everyone: jazz swing and rock classics; music from movie soundtracks; classics by the Beatles and Three Dog Night; and a chorale based on a traditional spiritual.

Concert band selections included "Music from Beauty and the Beast," Soundtrack Highlights from "The Hunger Games" and "Music for a Darkened Theatre."

The concert choir women performed "Into the Unknown" from "Frozen II." The full choir concluded the evening with "Hallelujah" from "Shrek" and "True Light," featuring soloists Kylie Jatho and Brieann Van Sloten.

Kristi Wingert is the vocal director and Corgan Petersen is the instrumental director.