The third time was charming

H-M-S defeats Tigers in first round of district tourney 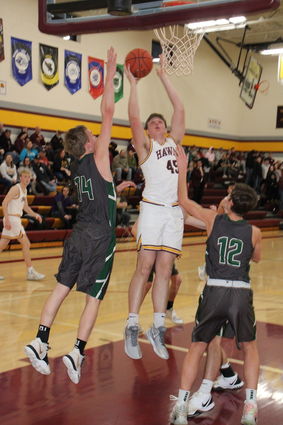 Lance Berends splits the defense to score two of his 19 points against Trinity Christian in the district quarterfinal on Feb. 15 in Hartley.

Any concerns that the third meeting between Hartley-Melvin-Sanborn and Trinity Christian might be a battle went away in the second quarter. Twenty straight points gave the Hawks a convincing half time lead and they continued to pull away for a 77-42 win on Feb. 15 in Hartley.

Three-point shooting kept the Tigers in contention during the early minutes of the 1A district quarterfinal game and also helped them rally from a nine-point deficit to make the score 20-15.

That would be as close as Trinity Christian would get. The Hawks mixed strong inside play with three-point shooting over the next...