The pressure was on 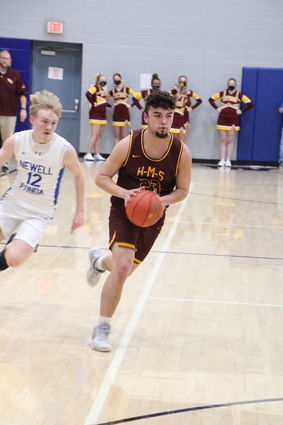 Jordan Ortega gets past Tanner Gerke of Newell-Fonda during action in the district semifinal at Newell.

The pressure to survive and advance is on every high school basketball team in postseason play. But Hartley-Melvin-Sanborn also faced the relenting pressure of Newell-Fonda's full-court defense during a boys' 1A district semifinal on Feb. 18 at Newell.

The Mustangs took control in the first quarter and kept the pressure on throughout the game. The result was an 80-43 season-ending loss for the Hawks.

"Their overall defensive intensity from the beginning of the game to the end was something we hadn't seen," Hawk coach Mark Petersen acknowledged. "They played a different brand of defense agai...