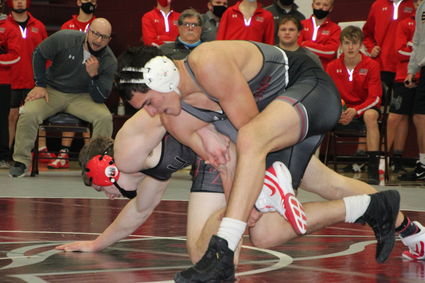 Chayton Faulkner grapples with Garrett Quirk of East Sac County. Faulkner was one of the Okoboji/H-M-S seniors recognized prior to the quadrangular at Milford.

Okoboji/H-M-S competed in a pair of wrestling quadrangulars last week and the Pioneers finished 1-2 both nights to fall to 5-13 overall.

The major difference was the final margins of the team scores. At Moville on Jan. 5, the Pioneers won a close battle with Alta-Aurelia (42-36) while being outscored by South Central Calhoun (76-6) and Woodbury Central (51-25), the No. 9-ranked team in Class 1A by The Predicament.