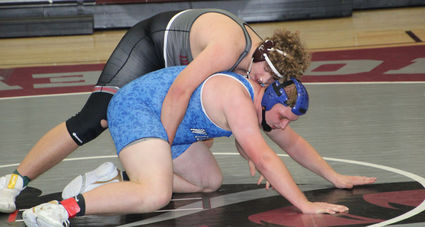 It was a battle of heavyweights as Nick Bronstad fights to maintain control of West Lyon's Jordan Ver Meer on Dec. 18.

A pair of Siouxland Conference wrestling teams showed their strength in a double dual hosted by Okoboji/H-M-S on Dec. 17 at Milford.

The Pioneers fell to 0-3 in conference dual action as West Lyon earned a 46-21 win and Central Lyon/George-Little Rock lived up to its Class 2A No. 9 ranking by The Predicament with a dominating 65-7 victory.

Nick Bronstad went the distance in a major decision loss to the Wildcats' Jordan Ver Meer, the No. 5 heavyweig...