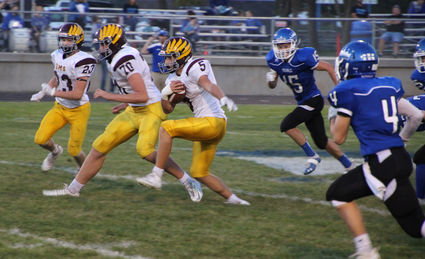 Flanked by Connor Dodd (23) and Lance Berends (70), Travis Kamradt breaks into the clear against MMCRU. He rushed for 141 yards and scored a touchdown against the Royals.

It's difficult to decide which was more impressive Friday night: Hartley-Melvin-Sanborn's offense which gained 655 yards and averaged 14 yards per play, or its defense which limited MMCRU to barely over 100.

Either way you look at it, the Hawks were dominant in their 62-0 district win at Marcus.

MMCRU ran two more plays (48-46) and had nearly five more minutes in time of possession but that didn't stop the Hawks, who rushed for 564 yards on 41 carries.

"We knew we could run the ball against them," Hawk coach Tyler Horkey said. "We were depleted a little bit offensive line-wise, but we had a...