No wins for H-M-S in home volleyball invite 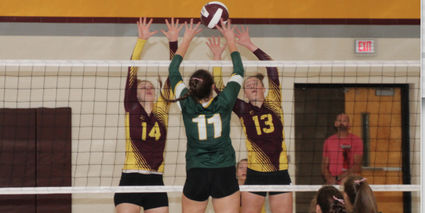 Seniors Olivia Grooters and Jessica Riedemann go up for the block against Gehlen Catholic during Saturday's tourney in Hartley.

For the tournament, Jasmine Lux and Ava Reitsma led H-M-S with 12 and 10 kills, respectively. Jessica Riedemann put down five kills and Olivia Grooters had four.

On defense, Abby Kunzman led H-M-S with 17 digs while Pearson had 15, Lux had 10, Riedemann had nine and Mastbergen ha...