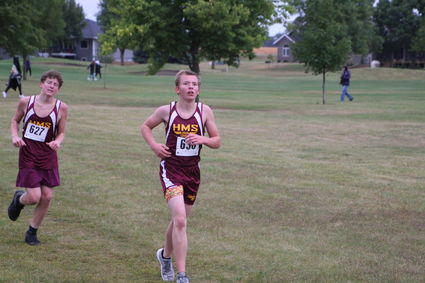 Mitchell Meyers runs in cool and damp conditions during the Sibley-Ocheyedan Invitational on Sept. 8.

Several Hartley-Melvin-Sanborn runners recorded season-best or lifetime-best times at the Sibley-Ocheyedan Invitational on Sept. 4 at the Sibley Golf Course.

Junior Madison Otto led the girls' cross country team, earning a medal and shaving time off her performance from the same meet a year earlier. Otto finished 16th in a tough field.

"Madison looked extremely good," Hawk coach Nicole Dorhout said. "She's getting stronger and stronger and is improving her racing skills. She ran more than 30 seconds faster than she did last year on the same course and nearly a minute faster than the previou...