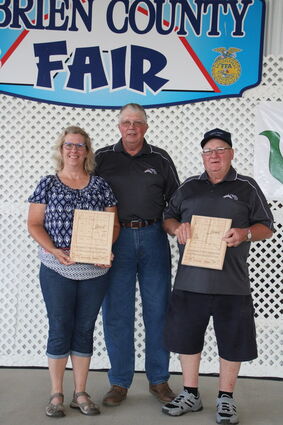 Soden, Konz honored for fair board service: Two long-time O'Brien County Fair Board members were honored for their many years of service on July 26. Lynnette Soden (left) and Duane "Mick" Konz (right) were awarded plaques commemorating their dedication to the fair by board President Darwin Gaudian. Soden, formerly of Hartley, served the board for 27 years, while Konz, of rural Hospers, served for 28 years. Soden came off the board last year and Konz retired this year.

Named to dean's list at Palmer College of Chiro

Logan Rozeboom, of Hartley, has been named to the spring 2021 trimester dean's list at Palmer College of Chiropractic's main campus in Davenport.

Rozeboom is the son of Kirk and Janet Rozeboom and is a 2014 graduate of Hartley-Melvin-Sanborn High School.

Cole Verbrugge, of Sanborn, has been accepted for enrollment for the summer 2021 trimester at Palmer College of Chiropractic's main campus in Davenport.

Verbrugge is the son of Charity and Cory Verbrugge, and a 2016 graduate of Hartley-Melvin-Sanborn High School.

The impact that a cold and snowy Iowa winter and driest spring since 1994 had on pheasant nesting success will likely be seen when the Iowa Department of Natural Resources conducts its annual roadside pheasant counts between Aug. 1-15.

The statewide survey is conducted by Iowa DNR staff who drive 218, 30-mile routes on gravel roads at dawn on mornings with heavy dew. Hen pheasants will move their broods to the edge of the gravel road to dry off before they begin feeding, which makes them easier to count.

"We had a cold and snowy winter from early January till February, which hurts hen survival, then a warm up, and a good March and April – the dry spring was a positive for nest success - so the model says our pheasant population will likely be status quo to a slightly increasing," said Todd Bogenschutz, upland wildlife research biologist for the Iowa DNR, in a news release. "It will be interesting to see the survey results. The conditions for the survey are important as the accuracy of the counts depend on the dew conditions when the routes are run. While the drought conditions have eased across most of Iowa, we are still fairly dry."

The August roadside survey has been conducted over the same routes since 1962. In addition to pheasants and quail, the survey collects data on partridge, cottontails and jackrabbits. Results will be posted online at http://www.iowadnr.gov/pheasantsurvey in early September.

Offshore fishing for bass has been very good lately. The panfish/perch bite has been excellent lately. Most lake temperatures are in the 80's. Fish are under more stress with warmer water temperatures; if you plan to catch and release, try to release the fish as quickly and gently as possible.

East Okoboji Lake: The water temperature was 82 degrees last Thursday. Many anglers have had success with slip bobbers/spoons and vertical jigging and drop shot fishing. A great bluegill/crappie/yellow bass bite can be found trolling weed lines.

Black crappie, fair. Crappie are hard to target specifically, but can be caught mixed with other panfish. The bite has improved in and around docks and hoists. Bluegill, good. Bluegill have been biting like crazy recently. Leeches or worms and a simple bobber setup work well. Pumpkinseed, good. Fun and easier to catch from most docks. Use a small hook, bobber and piece of worm.

Minnewashta Lake: Panfishing has been good for anglers trolling weed lines. Vertical jigging is improving. Black crappie, fair. A nice crappie bite can be found with a little movement around the lake. Bluegill, fair. Pumpkinseed, good.

Spirit Lake: Spirit Lake has been experiencing natural turnover recently, stressing and killing some smaller fish when the cold anoxic water mixes with the warmer oxygenated water. Deeper water has been going anoxic lately, leaving it devoid of fish. The water temperature was 80 degrees last Thursday. Fishing has been hit-or-miss lately. Perch and panfish bites have been good.

Walleye, fair. Bite is hit-or-miss at dusk, but the day bite is improving. Many anglers have started to fish in shallower with slip bobbers along weed edges. Yellow perch, fair. Best bite is morning until 11 a.m. and mid-afternoon. Depths vary depending on the time of day.

West Okoboji Lake: The water temperature was 80 degrees last week. Many anglers have been most successful with trolling, but jigging and casting has also been very good. Offshore fishing for bass has been great.

Bluegill, good. Bluegill have been biting like crazy recently with fish up to 10 inches seen. Jigging, casting, and slip bobbers have been working very well. Leeches or worms and a simple bobber setup work well. Black crappie, good. Have been very picky lately, but can be easily caught if you aren't afraid to switch things up. Can also be caught frequently while picking through other panfish or have been found around weed edges. Walleye, fair. Walleye have been hard to target, but many anglers have been catching them while fishing for other species.

For each of the next four years, Seasons Center for Behavioral Health in Spencer will receive a $200,000 Health Resources and Services Administration grant. All funds will be used for the new Family Support Center located at 147 South Main in Sioux Center.

"With the support of this grant, we can ensure foster and adoptive children and their families have access to appropriate treatment, and agencies and professionals have the resources and supports needed to provide high quality foster/adoptive services," said Kim Scorza, CEO of Seasons Center in a news release.

Following an intensive community needs assessment that included interviews with foster and adoptive families, other local agencies, churches and community members, a Family Support Center was identified as a key objective in Seasons' Strategic Plan.

Christina Eggink-Postma, Vice President for Program Coordination and Compliance, is taking the lead on the Family Support Center along with Sherri Huizenga, Permanency Support Specialist. Huizenga has extensive experience working in child welfare and substance use counseling, as well as personal experience as a foster and adoptive mother.

Seasons Center is hoping to open the Family Support Center early this fall.

Farmland values in Iowa, Nebraska, South Dakota and Wyoming continue to strengthen, building on the gains that followed the 2020 harvest.

Supported by low interest rates and the renewed optimism of higher grain prices and farm income, land values are nearing levels not seen in eight years.

Farm Credit Services of America has released its July 2021 farmland value report based on 63 farms spread across its four-state territory. Fifty-three farms increased in value, eight saw no change and two declined. On average, values were up 7.5 percent in the first six months of 2021.

Iowa farmland is only 7 percent shy of its 2013 peak, and the real estate market remains active. A week after the completion of FCSAmerica’s July benchmark report, six bare land farms in central Iowa sold for a low of $14,200 to a high of $16,800 an acre.

“As anticipated, the substantial run up in farm profitability has resulted in increased farmland values on the whole,” said Tim Koch, chief credit officer for FCSAmerica, in a news release. “But we also saw significant differences in values at the local level based on market activity, including the number of sales and land availability.”

According to FCSAmerica, those areas that saw little change in value also tended to have a higher concentration of pastureland. In South Dakota, where values are 11 percent behind the market peak, only pastureland saw no gain. As cattle operators focus on retaining cash, pastureland values will likely see continued price pressure in coming months.

While drought is impacting crops in areas of FCSAmerica’s territory, it is unlikely to be a drag on cropland values. Koch said that strong crop insurance price levels will offset drought-related production losses. The majority of grain operators are expected to be profitable again in 2021 and interest rates remain favorable.