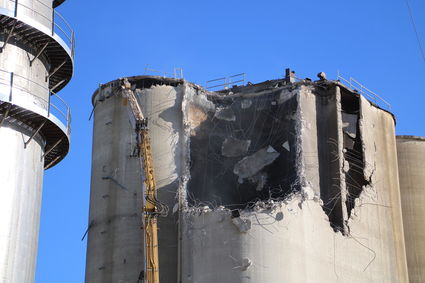 A single excavator was in charge of tearing down Ag Partners' damaged elevator.

Royal's skyline is going through some big changes.

Demolition of Ag Partners' main grain elevator complex started Friday at the company's location in the north part of town. The structure suffered a massive explosion in August caused by "a grain dust incident," according to Ag Partners, and has been sitting empty awaiting demolition ever since. 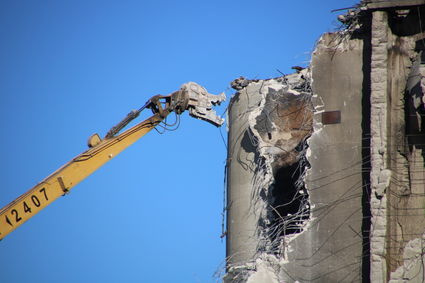 More imaginative minds might say the excavator looked like a brontosaurus chomping away at the grain elevator.

The site is expected to be cleared by the end of the month. A single excavator with a multi-processor equipped with demolition jaws methodically has been tearing through concrete and steel working its way from the top down over the past week.

According to the company, the rebuilding process will begin around the start of 2021. The new structure will include four steel bins, two 15,000-bushel/hour legs, and two pits to the south of the complex along with necessary towers and catwalks.

"The new design will continue to provide fast unload times in the fall with a capacity to unload grain at 60,000 bushels per hour between the two southern unload pits and the northern high-speed pit," Ag Partners stated in news release.

The explosion occurred on Aug. 25 and could be heard throughout Royal. Nobody was hurt in the incident.