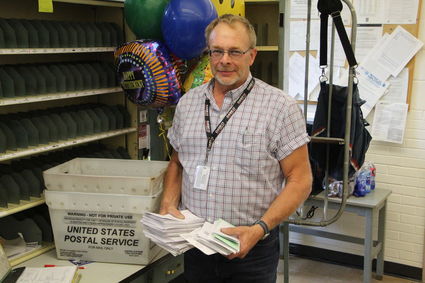 Final delivery: The 123-mile trek that was a big part of Larry Hennings' routine six days a week for nearly 35 years came to an end last Friday. It was Hennings' last day as a rural mail carrier. Hennings began his postal career on Dec. 26, 1985, as a sub. A conversation with Bob Kluender, who was a rural carrier at the time, sparked his interest, and Helen Kuehl hired him. Hennings started on Route 1 and then moved to Route 3, which includes an area south of Hartley and northeast of Sanborn. He estimates he used 10 different vehicles, and he never had an accident. His plans are to devote more time to his farming career and being with his wife, Rebecca, their two sons and two grandchildren.

Century Mutual Insurance Association, a northwest Iowa farm and residential insurance company, had to make adjustments to its Annual Firemen's Golf Benefit Tournament. This year's event was not held in person but instead offered an entry fee match to those teams who have participated in the past.

Eleven teams submitted entry fees totaling $2,860, with a match from Century Mutual of $2,860 for a total of $5,720 being distributed among eight fire departments.