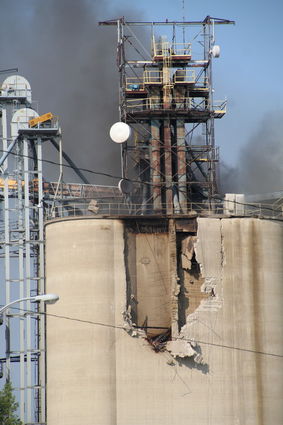 A portion of Royal was evacuated Tuesday following an explosion at Ag Partners that blew apart the top of a grain elevator.

The explosion occurred around 3:15 p.m. The area north of Main Street near Ag Partners was evacuated shortly thereafter, and power was cut to the entire town.

No injuries were immediately reported and the exact cause of the explosion has not been officially released. Emergency personnel responded to the scene and began assessing the situation with the help of a drone, which could be seen flying around the gaping hole left in the damaged elevator. Black smoke could also been seen billowing out of the structure from miles away. 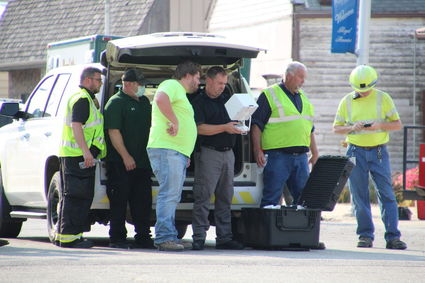 Royal resident Rich Green was at the gas station on Main Street when the explosion occurred. He said the whole building shook and he ran outside to locate the cause.

"All I could see was this big flame," he said. "The explosion shook the whole town. First, there was this squealing noise, then two loud booms. It sounded like a double-barreled shotgun going off, both triggers pulled."

Roads around the elevator were closed to traffic, but onlookers gathered on Main Street to watch the scene unfold. Fire departments and emergency personnel from multiple communities were on hand to address the situation.

"You worry about all the people with houses and businesses around [the elevator]," said Green.

More information about the explosion will be included in the Aug. 27 edition of the Sentinel-News.