Torn from the wreckage 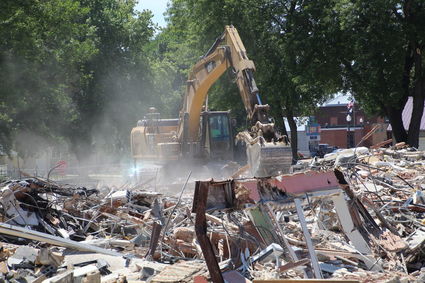 Cleanup work at the H-M-S Middle School building in Sanborn is expected to take around 3 weeks.

What was once a sturdy school is now a mere pile of bricks, cement and metal. 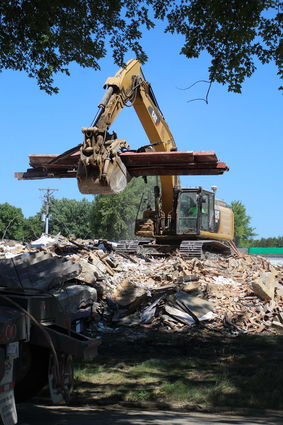 An excavator moves steel beams from the rubble to a nearby pile.

Demolition of the Hartley-Melvin-Sanborn Middle School was completed last week. The process of removing the rubble started immediately and was expected to take approximately three weeks, according to Boyd Jones project manager Mark Pfister.

"They'll recycle what they can. They're charged by tonnage and want to take as little to the landfill as possible," he explained. "It's a lot to clean up. It's basically the worst mess you could ever imagine."

An excavator has kept busy sorting the mess at the Sanborn location. Steel and other metal has been methodically removed from the rubble and separated into piles before getting transported away from the site for recycling. Brick and cement undergo the same process.

Foundation work to the north and west of the demolition zone has already begun. A newer portion of the middle school built in the 1990s was kept and will be used when the school reopens in 2021.