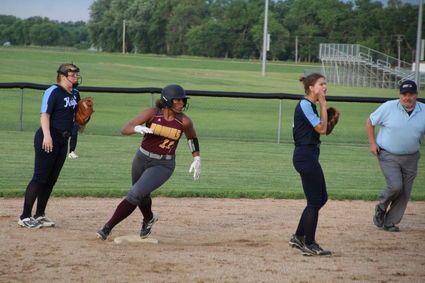 Hannah Jochims looks to see if she can advance another base after getting to second on a passed ball.

A better night at the plate supported by good pitching and defense was a successful formula for Hartley-Melvin-Sanborn's softball team, which defeated Trinity Christian, 11-5, on June 24 at Hull.

"It was a nice win for the girls," Hawk coach Carissa Post said. "Offensively we did a much better job with our bats."

VerHelst's two-run double in the first inning put the Hawks i...