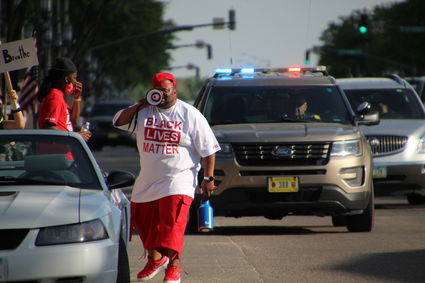 A protestor leads a chant with a megaphone near a police car during the march on Grand Avenue in Spencer on June 4.

If you've ever wondered what it would feel like to live through the Spanish Flu pandemic of 1918, Great Depression and civil unrest of the 1960s all at once, 2020 is just the year for you.

The last week has been heartbreaking. Millions of Americans have taken to the streets in protest following the death of George Floyd, who died in Minneapolis on Memorial Day at the hands of police. Multiple videos of the situation were circulated by news outlets and on social media platforms, leading to a groundswell of rage across the country. With a cop's knee on the back of his neck, Floyd begs for his life as he struggles for air. "Please, please! I can't breathe, officer!"

Minneapolis has since burned and mayhem has reigned supreme from sea to shining sea. Peaceful protests have been overshadowed by agitators looking to destroy and loot. City streets more closely resemble warzones than bustling metro areas. It's all so unbelievable to witness in real time.

The violence and thoughtless destruction can never be justified, but as Martin Luther King Jr. once said, "A riot is the language of the unheard." After the smoke clears and dust settles, we have no other choice but to listen. This chaos has resulted from decades of injustices against African Americans. There is real pain in these communities, and that can be hard to grasp when all we see is burning buildings and broken windows. It's important to ask why this is happening rather than casting judgment on what is happening.

This nation is hurting. The coronavirus has killed more than 100,000 Americans, our economy has tanked and millions of citizens have lost their jobs. Now, our great cities are on fire. However, we must heal and unite rather than continue this division. There is no chance to revive and thrive if we let chaos and destruction rule the day.

On Jan. 20, 2017, President Donald Trump was sworn into office and delivered his inaugural address. In it, he made special note of inner-city poverty, rusted-out factories, a lagging education system and crime. "This American carnage stops right here and stops right now," he said.

Now, more than ever, would be a great time for it to end.