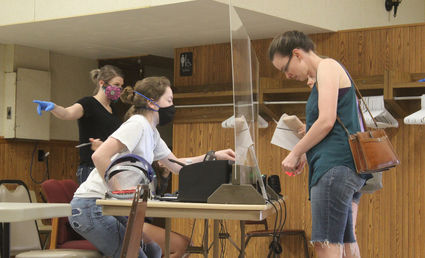 With plexiglass in between, a voter signs in at the Primghar Community Building during Tuesday's primary election.

Randy Feenstra, a Republican from Hull who represents District 2 in the Iowa State Senate, soundly defeated Rep. Steve King with 46 percent of the vote in the GOP primary. Feenstra's victory now pits him against Democrat J.D. Scholten in the November general election.

"I am truly humbled by the outpouring of support over the past 17 months that made tonight possible and I thank Congressman King for his decades of public service," Feenstra said in a statement.