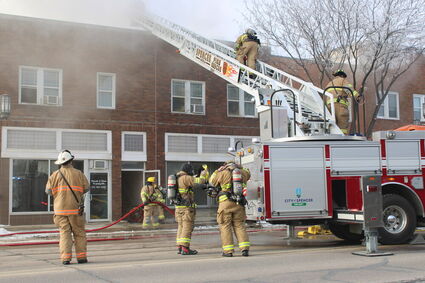 Firefighters attempt to extinguish a blaze in downtown Spencer on Sunday afternoon.

Investigators are still trying to determine the cause of a fire Sunday that damaged several businesses and upstairs apartments on Grand Avenue in Spencer.

According to a news release from the Spencer Fire Department, firefighters were dispatched to 215 Grand Ave. Apt. #5 at around 12:30 p.m. The occupant called 911 and advised that she had just gotten home and that there was a lot of smoke in the apartment.