2 wins and a cold shooting night 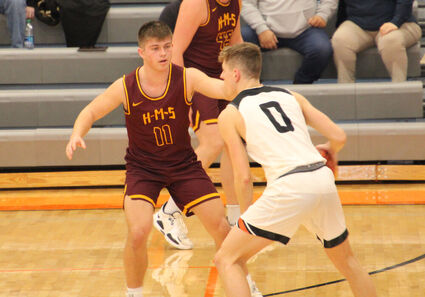 Trenton Vollink has his eye on Sheldon's Blake Radke while on defense in the Hawks' 67-57 win.

Hartley-Melvin-Sanborn followed up a pair of boys' non-conference basketball victories with a cold shooting night that ended the Hawks' winning streak at five games.

Early offensive success was the key ingredient in a 67-57 win on Jan. 9 at Sheldon. The Hawks scored 21 points in the first quarter, fueled by good long-range shooting that opened up things in the lane.

"We hit a couple of threes that helped to spread the defense out and off of Lance [Berends] in the post. Our ball movement was excellent and we were able to find the open shooters and play off our advantages we created," said Hawk coach Naet Hoaglund.

Sheldon responded with a rally that narrowed the gap to 26-22. The Hawks then extended the lead to 35-28 at half time.

The margin reached double digits during the third quarter, the largest being 14 points. The Orabs stayed in striking distance but the Hawks made enough shots and defensive stops late in the game.

"It seemed like any time we made a run, they responded right back with one of their own," Hoaglund noted. "I thought we responded to their runs the way we needed to, poised and controlled, and never let things spiral.

The Hawks had "exceptional" rebounding, led by Berends with 13, Ebel with 11, Jacobsma with 10 and Travis Kamradt with five. Ebel also contributed four assists and four steals; and Vollink had four assists.

Balanced scoring and improved defense in the final quarter helped the Hawks close out a 74-54 defeat of West Bend-Mallard, on Jan. 12 at West Bend.

Berends led a quintet of double-figure scorers with 22 points. Ebel finished with 16 points while Jacobsma, Kamradt and Vollink each scored 11.

"I thought things flowed really nicely for us throughout the game," Hoaglund said. "We were able to get the ball where it needed to go when it needed to be there."

The third quarter was a dogfight as the Hawks continued to struggle defensively. But they responded late in the game and outscored the Wolverines by a 22-9 margin.

"I thought we struggled defensively and on the defensive boards," Hoaglund admitted. "We were able to get some things corrected in time for the fourth quarter and were able to close out the final stretch on a much more positive note."

Friday, Jan. 13 proved to be an unlucky day for the Hawks as they resumed War Eagle Conference play. Held to the lowest point output so far this season, H-M-S fell short against MMCRU, 44-40, at Marcus. 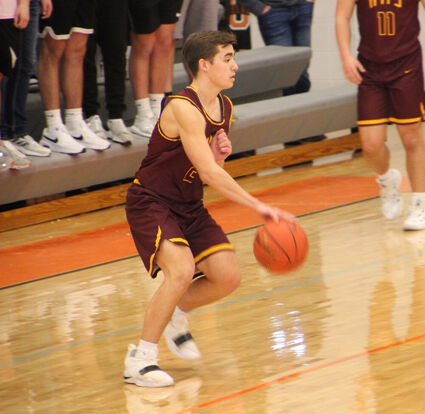 Landen Elwood moves the ball around the perimeter of the Sheldon defense in action on Jan. 9.

After making two-thirds of their shot attempts the night before, the Hawks finished with just 12 field goals [out of 44 taken], and were 0-for-10 from three-point range. The Hawks also struggled at the foul line, converting just 16-of-32 attempts.

MMCRU got off to good starts in both halves, taking a 13-8 lead in the first quarter and outscoring H-M-S by seven in the third. The Hawks cut the deficit to 19-17 at half time and outscored the Royals by five in the final quarter, but that would not prevent them from falling to 3-2 in conference play