Still not able to get over the hump 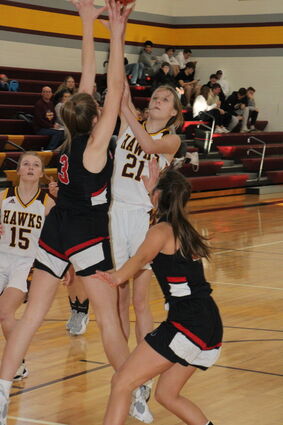 Moriah Otto shoots over two defenders to score at the end of the first quarter of the Hawks' game with Akron-Westfield.

Back in action after a long layoff, the Hartley-Melvin-Sanborn girls' basketball team suffered a pair of home losses to War Eagle Conference opponents last week.

The Hawks trailed by as many as six points early in the game but managed to pull even with H-LP three times, including in the final seconds of the first half which ended in a 23-23 tie. H-M-S then led throughout the third quarter, extending the advantage to 35-27.

The Hawks still led by seven in the fourth quarter, but the Wolves went on a 15-0 run...