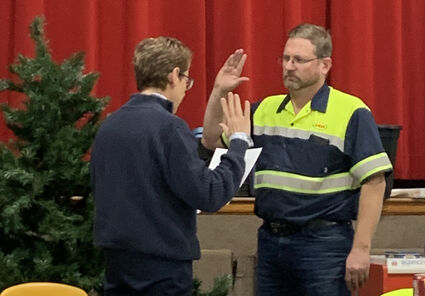 CC/E Board Secretary Diane White administers the oath of office to Board President Denny Dalen, who was re-elected to the position by his peers during the annual re-organization meeting on Nov. 30.

After more than a year of discussion and one negated attempt, the Clay Central/Everly school board on Nov. 30 finally changed the way members are elected.

"This will give our district more opportunity for people to run at large," said Superintendent Kevin Wood.

Under the new arrangement, two members (Districts 1 and 2) must reside north of county road B24 while two must reside south of B24 (Districts 4 and 5). District 3 will now be an at-large spot, and the seat holder can reside anywhere inside the district.

Previously, CC/E constituents elected each board member from the director distric...