Improved second half not enough in girls' hoop opener 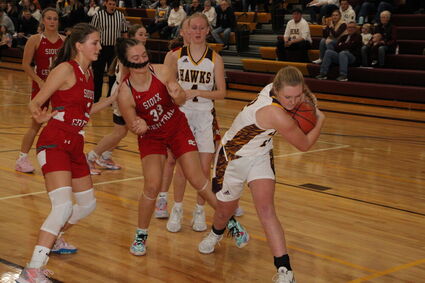 Eliza Tewes leaves no doubt as to who will corral this rebound during H-M-S's season-opener with Sioux Central.

Winning the second half was a promising sign for Hartley-Melvin-Sanborn in its girls' basketball season-opener. But visiting Sioux Central had all but settled the outcome by halftime to hand the Hawks a 67-43 loss on Nov. 22.

H-M-S trailed 7-0 to start the contest and could get no closer than 10-4. Converting scoring opportunities set up by their defense, the Rebels led 24-8 at the end of the first quarter. That trend continued and Sioux Central increased the margin to 44-17 at half time.

The Hawks faced a 32-point deficit late in the third quarter, but outscored the Rebels by eight over th...